The Android Gradle Plugin introduces the concept of product flavors. When you have a project that contains multiple modules, it is possible that your modules do not agree on the number of flavors or flavor dimensions. The DSL offers ways to handle such situations.

The important portions of the DSL are matchingFallbacks and missingDimensionStrategy. Which one you choose depends on which module declares more flavors: the consuming module, or the consumed module. This table in the Android Gradle documentation explains this in more detail.

I had a slightly more complex project structure where I thought missingDimensionStrategy would be my tool of choice, but it turns out I was wrong. This post describes my situation and why I was wrong.

The project that I use for this blog post is here. The app itself is a shell. It has no activities, no functionality and almost no Android code. It has the following modules:

To demonstrate how flavors work, I’ve created some string resources (using gradle’s resValue feature) in every flavor, in every module that does care about the flavor. When I build an APK for a particular flavor, I can inspect the string resources in APK analyzer to figure out which variant was used.

This is the starting point of my experiment, and it fails to build. You can git checkout checkpoint-2 if you want to see it in action. The build error you see looks like this:

The reason for this build error is that both the intermediate modules know nothing flavors but they depend on leaf which does.

Here we’re saying that when trying to build the intermediate modules, choose the emulator variant of the leaf module. This works, kind of. We can build the APKs for both flavors and we can see the correct strings get included in the built APKs.

This is what the emulatorDebug flavor looks like. Note that it has included the strings "App Emulator" and "Leaf module Emulator" 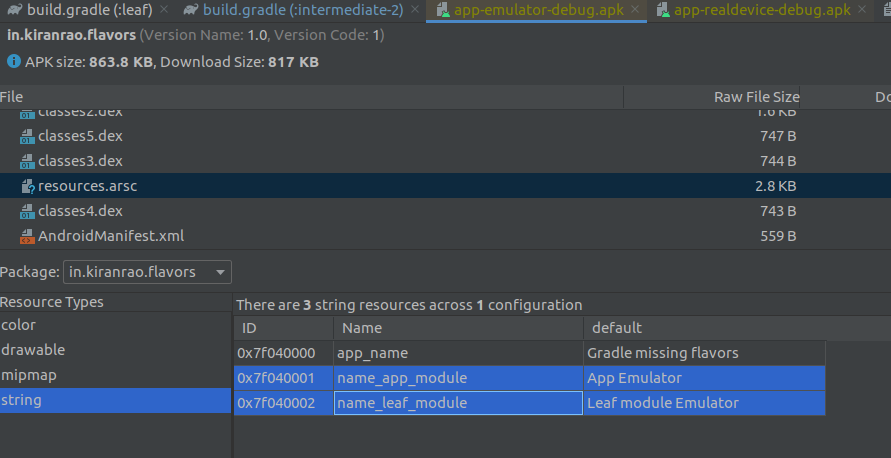 And here’s the realdeviceDebug APK. Note that it has included the strings "App Real Device" and "Leaf module Real Device"

You can git checkout checkpoint-3 if you want to see it in action.

The problem with this solution becomes obvious when you see the build output window. It contains this warning

Module ‘leaf’ has variant ‘realdeviceDebug’ selected, but the modules [‘intermediate-1’, ‘intermediate-2’] depend on variant ‘emulatorDebug’

The problem is this: When you chose realdeviceDebug variant for app module, the same variant is selected for leaf module. However, for the intermediate modules, we specified we want to use emulator flavor.

This is not a problem for us because we explicitly stated that the intermediate flavors don’t know or care about flavors. But, how do you fix those warnings?

Unfortunately, the only correct way to achieve this was to make the intermediate module flavor-aware. This might seem tedious and against the original intent, but I would argue that for this situation, it is a future-proof approach compared to missingDimensionStrategy. Because with missingDimensionStrategy if for some reason an intermediate module had to become flavor-aware, it could end up silently choosing the wrong flavor of the leaf module.

So, the fix is to actually introduce the same flavor dimensions and flavors in the intermediate modules as in the leaf modules. You can git checkout checkpoint-4 to see it in action. If you are worried about the repetitive flavor configuration code in the intermdiate modules, you can extract it into a flavors.gradle and then use it in the build.gradle files.

Use missingDimensionStrategy mainly if your app module is missing flavor dimensions compared to library modules. Think twice before using it in a module that is itself a dependency for another module. It might look like it works, but it might be doing the wrong thing.

Thanks to Xavier Ducrohet (@droidxav) for pointing out the potential pitfalls of using missingDimensionStrategy for my use case.